Behind the Cross: The Stories of Pali’s Woolsey Fire Victims 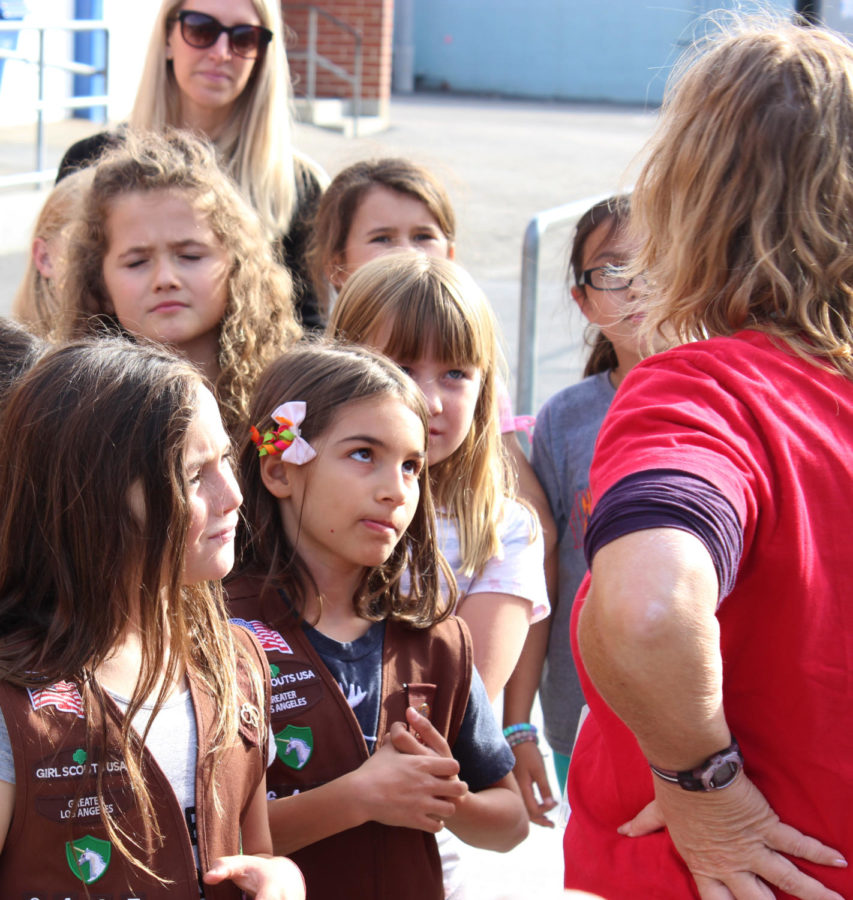 As the Woolsey Fire burned in nearby Malibu, a Red Cross shelter was set up in Pali’s gym on Nov. 9.

Those displaced by the fire were given supplies, shelter and whatever else they may have needed as part of the relief effort. However, the extent of what happened on our campus goes far beyond water bottles and blankets — each person displaced by the fire has a story and has been affected in a different way. On Tuesday, Nov. 13, the Tideline’s Editors In Chief visited the shelter.

Emerging from Pali’s gym with a bundle of blankets and a backpack full of supplies, Janaína Lemoine-Coutinho greeted us with a smile. It’s telling how many of the people, both those helping and those being helped, are smiling around here. In light of such a tragically destructive event, the air of positivity surrounding the relief effort is striking in its purity. Rarely does one get to witness such coordinated displays of altruism with no ulterior motive.

Lemoine-Coutinho, half-French and half-Brazilian, currently resides in Southern France. A marathon runner, she is visiting Los Angeles in order to participate in the 2018 Malibu Half Marathon in support of Haiti, her home country. After she ran, however, she decided to stay for the holidays and to visit friends “because the area is just so beautiful.”

When the fire started, she was at a friend’s home in Coral Canyon. Unfamiliar with the area and responsible for much more than just her own safety, the story of her evacuation is remarkable.

“We helped [her friend] save her rescue dog — we saved all the dogs around that we could,” Lemoine-Coutinho said. “She had a minivan, and there were only two of us. We picked up four dogs in the minivan … my other friend also had a rental car, and she took another three.”

Lemoine-Coutinho’s account addresses one of the major issues facing relief efforts: pets. Across all areas both directly and indirectly affected by the fires, there have been a number of warnings that animals, frightened by the flames near their home, are fleeing for safety and ending up in the backyards of strangers, who have been encouraged to leave out food and water. These displaced pets are difficult to assist and even more difficult to enumerate, and, in saving seven dogs altogether, Lemoine-Coutinho and her friends demonstrated selfless heroism. Getting themselves and the dogs to safety was a harrowing task.

“The smoke was building up, and, in the middle of PCH, my friend ran out of gas,” Lemoine-Coutinho said. “We came back to Zuma [to try and find her], but we got lost. We had four dogs, no money, no phones or passports (lost in the fire), and my friend who was lost could not speak English very well.”

Thankfully, Lemoine-Coutinho eventually found her friend near Zuma. She saw that more smoke was coming, “but the people there told us not to worry.” Believing these people, presumably residents of Zuma, Lemoine-Coutinho said she stayed. However, the police came soon after and everyone to evacuate. She and her friends once again found themselves in the terrifying position of being lost within a raging wildfire.

“We got lost in Point Dume, and our GPS wasn’t working,” Lemoine-Coutinho said. “The police told us to leave, but they didn’t give us directions or tell us where to go. We kept trying to get on to PCH, but every street we turned down was a cul de sac. It was raining fire.”

Eventually, they found their way to Santa Monica, seeking one of the free AirBnB rentals provided to victims. Upon realizing that they were all booked, however, they met firemen who directed them to Pali’s Red Cross center. “The people are so kind to us here, and they’ve given us everything we’ve needed,” Lemoine-Coutinho said. “We’ve been here for two nights, and they just found us a room (in a Palisades house) to sleep in.”

Lemoine-Coutinho’s newfound short-term living arrangement displays yet another one of the unheralded good-hearted aspects of the relief effort; not only are the staff and volunteers in the Red Cross center helping those who fled the fiery hills, they also are actively searching for ways to get them out and into a more comfortable situation.

Regardless of the circumstances, Lemoine-Coutinho reflected on her time in Los Angeles, fire included, with the same positivity she greeted us with. “It’s been amazing here,” she said. “I hope to come back another time — when there isn’t a fire.”

Malibu resident Melaina Evangeline came directly to Pali after evacuating from her home. “I came down late,” she said. “At first, I actually tried to go north on PCH (toward Santa Barbara), but the palm trees were on fire and it was dark. I turned around and came back this way (toward Pali) immediately.”

Like many other residents of Malibu, Evangeline was unsure of when to begin evacuating. Even as evacuations were officially ordered, traffic getting out of Malibu was bumper-to-bumper, and she said that she didn’t know whether to wait for it to abate.

In hindsight, Evangeline realizes that she “waited a little bit too long.”

But upon arriving at Pali’s Red Cross shelter, she said she found that “there was everything you’d possibly need — people, resources and food,” and she was taken aback by the hospitality of both the people and the businesses in the surrounding community.

But even with a surplus of food and other supplies, living in the shelter still clearly presents challenges, both mental and physical. “A couple nights I’ve gotten good sleep, a couple nights I haven’t… we pretty much had to watch from a distance while the fires burned,” Evangeline said. “They kept getting bigger and bigger. Where I was living, it was a rental, and now it’s gone.

“I know a lot of people whose houses are gone. I know people who had two houses, and now both of them are gone.”

Dealing with the certainty of such ravaging loss while also battling the uncertainty of an insecure living situation is a battle being fought by most, if not all, of those waiting. “If they’ve lost everything, or they don’t know if they’ve lost everything…they come here,” site manager Sue Canter said. “We have a lot of elderly that come in. We’ve seen some of the homeless population come in, thanks to the efforts of service organizations such as St. Joseph’s and Pathways.”

Facing jarring losses, those affected by the Woolsey fire have managed to find solace in the goodwill of the community, the solidarity of those in similar circumstances and even the occasional presence of a notable figure.

“Lady Gaga came by the other night,” Evangeline said. “She spent two hours here and spoke to every single person.”

Before we could say hello to 55-year-old Malibu resident Stephanie Ann Harvey, her dog, Goddy, said hello to us.

“Everyone who sees him melts,” Harvey said. “He’s so well behaved.”

For Harvey, the Woolsey fire is not her first experience being displaced in California. She had only moved to Malibu two months ago after losing her home of 25 years.

“I’m from the Bay Area, Contra Costa county,” she started. “I was misdiagnosed with a mental illness and put in a hospital. When I returned, my home which I had worked so hard for was gone. I went to the recorder’s office to find the corporation who went through my house, and they told me the information was confidential. I was a renter — I paid rent every six months. Everything was paid up.”

After losing her home, Harvey said she travelled down the coast to Malibu, where she soon found herself without a place of residency or a job. She had just been getting settled, “waiting for time to go by and meeting people in the community”, when the fires struck.

“I drove down here in my Chevy truck on August 30. The fire burned it to the ground,” Harvey recounted. “This is the second time this has happened to me (being displaced) in the past year.”

Still, Harvey has a positive outlook. As we speak, she doesn’t dwell on any specific negative occurrence in her life for too long before discussing her plans to rebound and recover. Goddy — in what must be described as possibly the cutest interaction we saw at the shelter all day — seems to pick up on her exhibits of optimism, his ears perking up as he rubs his head against Harvey’s legs whenever she picks up her tone.

“I’m pretty persistent,” she said. “ I’ve already talked to a number of people in the community. I can bust ass, and I’m ready to go to work. We’re all in it together now. I’m not alone anymore.”

Just as optimism appears to be a pervasive theme within the shelter, as evidenced not just in the accounts by people such as  Lemoine-Coutinho and Evangeline, but of the happenings within the space as a whole —  a local Girl Scout Brownie troop filled with elementary-schoolers and replete with all of the unbridled joy and enthusiasm which comes with that territory arrives to bring hand-made cards, decorations and, more than anything, smiles — the viewpoint that the fire is not just an opportunity to come together as a community, but possibly even an avenue to renewed work opportunities and more so a combination of both, is not one that is unique to Harvey.

“I’m just concentrating on rebuilding Malibu. There’s an opportunity here, and we can help people out. Hopefully I’ll even make some money,” he said.

“Nobody, rich or poor, should be without a home. Everything can be rebuilt — people can’t. This is a golden opportunity for us to show what Malibu is all about.”

Both people like Trapp, a long-time Malibu resident, and Harvey, someone relatively new to the area, along with all those in between, seem to share a common sentimental connection to the area that goes past their simply living there and seeing financial opportunity.

“I’ve never been married,” Harvey said. “Usually, when I get ready to bond with somebody, I get in my car and run… but I think Malibu is so beautiful. Now I know where I want to get married and spend the rest of my life.”

It is certainly a bit surreal that, of all the feelings that such devastation and destruction can prompt, fondness is apparent for many of the victims of the Woolsey fire at Pali. Seeing this community — the volunteers, the victims, even two of Pali’s security guards who we witness speaking with a homeless man leaving the shelter — uplift each other is nothing short of inspiring.

“I feel for the people here, and I want to be able to help them out,” Harvey said just before we parted ways. “I want to be here for them.”

Perhaps more than anyone, Harvey’s spirit embodies the true nature of the relief efforts here at Pali, and of the post-Woolsey Malibu community as a whole. Here is a woman who has been displaced twice in the past year, who slept “freezing in a park” just two nights before, with the well-being of others on her mind. Hearing her story galvanizes and humbles the listener.

But of course, there is one soul at the shelter whose positive spirit and energy is rivaled by none. As we depart, Harvey plays a game of fetch with Goddy, who, brandishing a flame-charred tennis ball, seems calmly content.