The Case for an Open Internet at Pali

Pali’s network restrictions are excessive and often puzzling. Why do we need them? 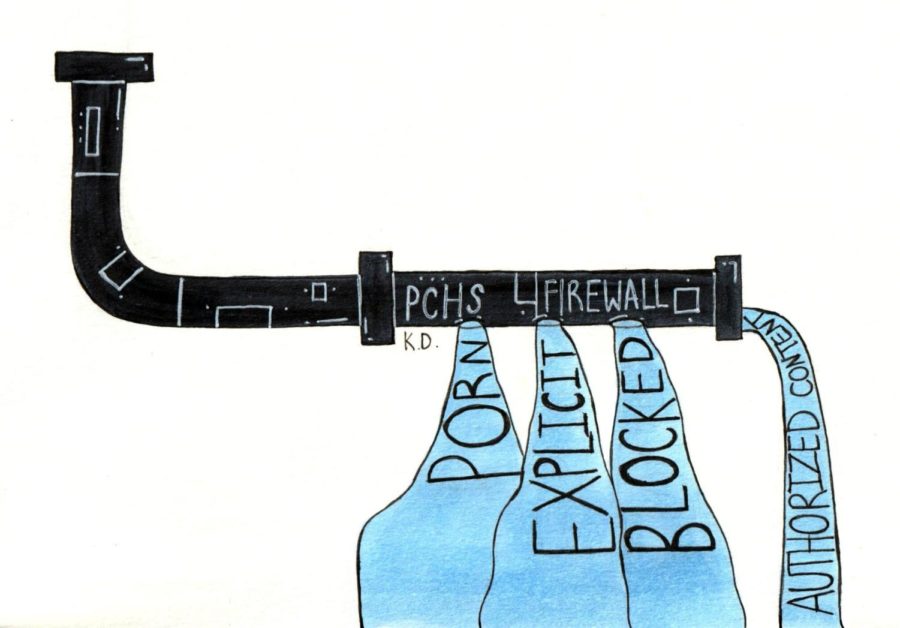 Every day, thousands of Pali students arrive at school, scrolling through the social media app of their choice. Before arriving, most of these students can browse and chat however they please. However, their freedom to enjoy open and free internet use stops as soon as they step on campus.

Since at least 2013, when Director of Information Technology Jeff Roepel first arrived at Pali, there has been a policy of categorically blocking off entire chunks of the internet to students, faculty and anyone else who uses the Wi-Fi network on school property. These categories include gaming, alcohol, drugs, pornography, social media or anything else considered detrimental to a student’s learning experience.

Most of these restrictions are mandated by the government. The school is required to block certain topics because of CIPA, the Children’s Internet Protection Act. According to the FCC, CIPA was “enacted by Congress in 2000 to address concerns about children’s access to obscene or harmful content over the Internet.” Under CIPA, schools are required to certify that they block pornography and other obscene content, monitor how kids use the internet on campus and further educate students about “appropriate online behavior.” If schools do not comply with these regulations, then they can have certain federal funds revoked.

However, the school does not just limit its internet protection to things that CIPA requires it to block. According to Roepel, the school also blocks social networking sites because they are “distracting” and “not educational.” This is where Pali oversteps. While it’s true that there are some harmful things on the Internet, it’s time to see the big picture and understand that the entire school community would benefit from a freer, more open campus network which allows the use of social media.

Social media can be educational. It is not just limited to Snapchat and TikTok; it also houses helpful message boards on sites like Reddit, documentaries on platforms like Netflix and YouTube, and a plethora of other educationally beneficial resources for students on the many other sites where young people congregate.

Junior Alex Camilleri agrees that Pali’s social media blocking oversteps. On multiple occasions, Camilleri has been denied access to sites that are part of his classwork because of inconsistencies within Pali’s system. He’s also been prevented from watching instructional videos on YouTube because they were “not specifically listed as educational,” he said.

This is simply unacceptable. The point of school is to educate students, and as Camilleri has experienced, the school’s filtering infringes on this purpose. Since it cannot perfectly block only the harmful areas of the web, the administration has made the unfortunate choice of using a “one-size-fits-all” approach instead of a nuanced solution that can benefit all parties involved.

The Tor project, a non-profit organization that provides tools to circumvent web filters, takes this further, arguing that a filtered web inherently impairs a student’s education. In an email, a corporate representative said that “we think that private access to the open web is critical for intellectual freedom and the pursuit of education.”

The thing is, with the widespread use of tools such as VPN apps — which make someone appear somewhere else online and circumvent web filters — and the Tor browser, most of these regulations are, in practice, ineffective and flimsy. Through these apps, students can evade network restrictions in seconds.

The school tries to stop this. Even though Roepel said that VPN services themselves are also “categorically blocked,” the issue is that while the school tries to enforce these bans, VPN networks get around them by building new networks at a breakneck pace, which constantly creates new pathways to free access. Roepel likens this process to an arms race.

This policy breaks down once you consider that it applies not just while class is in session, but also during nutrition, lunch and any other time that a student is on campus but not in class. Pali’s rules allow students to use their phones outside classrooms. By indiscriminately blocking free internet use at all times, Pali isn’t holding up their end of the bargain.

The inefficacy of Pali’s social media ban against sites like Tor means that it does not help the school eliminate the problem of students being distracted in class. But there are also negative impacts on the school as a whole, including cost.

Even worse, with all this money we’re spending on identifying what Roepel says are tens of millions of inappropriate websites, Roepel also says that “less than one percent” of traffic is regarding blocked categories, and that it is rare that someone actively tries to reach a blocked site during school hours. So why are we spending a small fortune on blocking what nobody is trying to find?

In fairness to Pali, there are some things being done well. There is some truly evil stuff in the world, and the proliferation of the Internet has made it all accessible to minors. A few minutes with a solid connection and a Tor browser can give anyone access to drug markets, red rooms (scenes of torture and graphic murder) and video of the recent mass shooting in Christchurch, New Zealand. This kind of content definitely needs to be blocked, and by ensuring that teenagers have limited access to it, Pali has the right idea.

Pali has also begun to implement solutions that don’t block websites wholesale. Library Media Teacher Andrea King taught a lesson that involved showing students sites made by the Klu Klux Klan. The lesson was intended to show students how easy it is to be “misled by information on the internet,” according to King. This is best done by showing students reliable sources as well as those heavily skewed towards one point of view. By allowing King access to these sources — sources that would usually be blocked — Pali is taking a step in the right direction.

Pali is also loosening its grip in certain places. According to Roepel, since 2013, Pali has allowed some classes to use websites which were previously banned. One example that Roepel gave is that of Pali’s Game Design Lab, which he said “can access the vast majority of gaming websites because, obviously, it’s curriculum related.”

With all this said, the current system has some serious flaws. The good news is that for each issue, there is a solution. For the stuff that is illegal, abhorrent or otherwise “not appropriate for minors to be on at a school with taxpayer dollars,” as Roepel said, keep it blocked. But students need access social media sites.