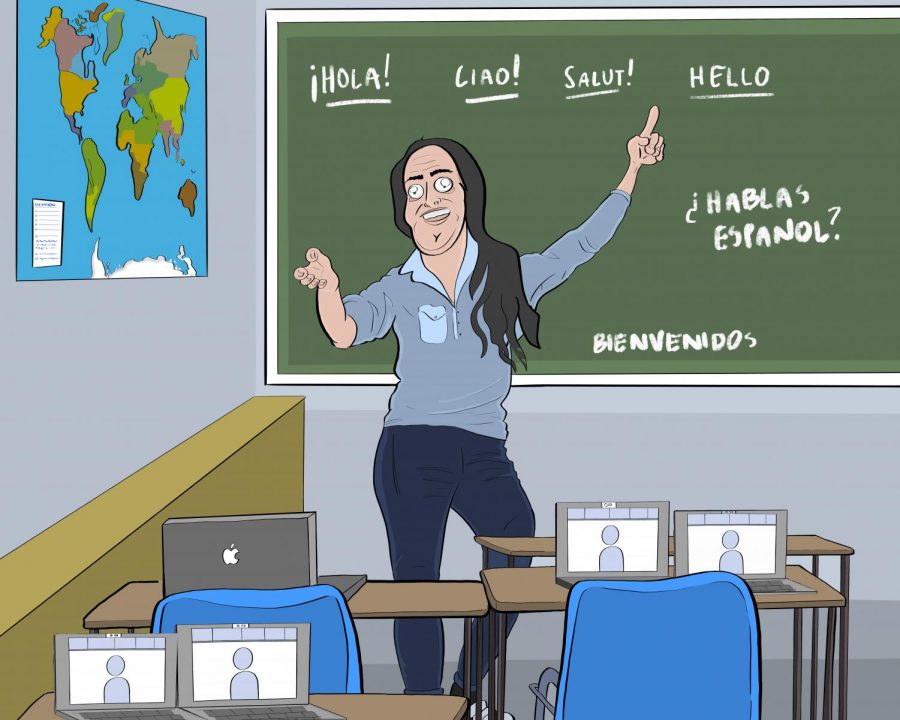 As Pali transitions back to in-person learning, the World Language Department is making numerous changes to its curriculum and class structure. These shifts create an improved learning environment and allow teachers and students to circle back and cover the curriculum eliminated during the online school setting last year.

Through the duration of eLearning, synchronous class sessions were reduced by approximately 40 minutes. Eva Pichlbauer, a French teacher at Pali, said that this scheduling change resulted in decreased direct feedback and corrections from teachers. Meanwhile, students were asked to complete more assignments independently.

Noah Badener, a junior who is currently taking Spanish 3, said that he received substantially more independent work last school year, attributing this increase to the fact that “teachers were rushing to give the students necessary information,” and that “there was rarely enough class time to thoroughly practice what we had learned.”

The surge in independent work “heavily affected my [understanding of] grammar because I wasn’t able to check with the teacher if what I was doing was right,” said Katharine Steffes, a junior taking French 3.

Additionally, due to her French 2 teacher’s inability to cover all of the content during online classes, Steffes said her current class has focused solely on reviewing last year’s curriculum. She added that the students are deprived of a solid foundation “considering that some people have to be retaught things from French 1.”

Unlike Steffes, Badener said that last year his class covered the complete curriculum during eLearning, but he still feels that he and his peers weren’t able “to fully grasp the [basic] concepts.” Consequently, Badener’s current language class has reviewed content, a decision Badener says has improved his understanding of the previous years’ material, solidifying his foundation in Spanish.

Despite the complications in addressing learning gaps, Pichlbauer said that the return to in-person instruction allows for the restoration of many advantageous features of education. Namely the return to campus has enabled her to increase group work, which she said has restored the collaborative learning environment within the classroom.

Moreover, Pichlbauer said that she has also observed an ample increase in student participation this semester compared to that during eLearning. Being in person, she said that it is easier to gauge students’ engagement.

“As I walk through the class during individual or group work, students are more likely to ask a question than in the Zoom classroom environment,” Pichlbauer said.

The benefits of learning a language in-person are acknowledged by both teachers and students.

Steffes said that in-person school has allowed her to receive additional support from her peers, something she lacked when school was conducted online. This collaboration has been “super beneficial because we are able to learn from each other’s mistakes and make learning the language a little more fun.”

In addition, returning to in-person learning has enabled students who are struggling are more likely to get help, Steffes said. “It is less embarrassing if you get something wrong since the spotlight isn’t on you,” she said. Because of this, Steffes said she is now more willing to engage in classroom discussions and to ask her teacher for feedback.

While Badener said that he believes that in-person education has improved participation, he still thinks that the classroom is an unforgiving environment. He said that peer pressure is more prominent in an in-person environment, and while this may hinder some students, Badener feels more encouraged to remain focused and on task.

When Pali classes were offered virtually, the World Language Department revised the way assignment categories were weighted, making grades more dependent on homework and in-class activities. Now that Pali has transitioned back to in-person learning, the department has reinstituted its emphasis on testing, making the performance category worth 60 percent of students’ grades. Pichlbauer said that this grading-scale adjustment was made because of the ability to proctor tests along with other benefits of in-person learning.

Despite this, Steffes disagrees with the department’s decision.

“I don’t feel this change is fair,” she said. “After coming out of quarantine for over a year we all have lost a little bit of the ability to talk in front of a class as comfortably as we [did] two years ago.”